You sit at your desk, turn on your laptop, "ping, ping, ping" your social network notifications start coming through and rather than be happy that someone got in touch or wanted to speak to you, your heart sinks. There is no getting away from it. Bloody trolls are everywhere and it feels like they are coming after you with pitchforks and the world is watching. It makes you feel sad, alone, stressed, embarrassed and if they are trolling something you worked hard on it can be soul destroying. 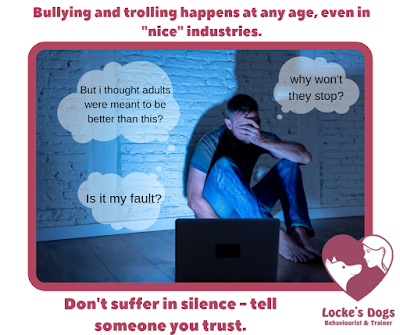 "Trolls"... they used to be green fairytale things, with warts, wonky teeth and bulgy eyes, that lived under bridges, yelling "Trip trap, trip trap" at various Billy Goats Gruff, and other passers by, but lately they seem to have emerged and taken on the role of online bullies, who have nothing better to do than make other people feel like shit. Sometimes they hunt in packs, sometimes they are alone in their world of insulting people for the hell of it.

I wasn't used to being trolled, or how rude and mean people can be just for the sake of it and I certainly wasn't expecting this type of little side stress when I started in the doggy world. I thought that kind of thing happened in school, but I seem to come across it so much more now! You would think doggy - centred folk were all nice people, sensible and caring adults, what with caring for the animals and not wanting to use aversive or punishing methods... and for the most part thankfully most are... But crikey there are some horrible buggers out there too. Oddly enough, I have never had to worry about trolls online, until I found myself  running a business page and helping on others.

It's not just in the dog world, it is everywhere. Just look how many horrible gits have started on Greta Thunberg, or who make nasty xenophobic, racist, homophobic and any other kind of bigotty comments on things from behind their laptop screens.

I have found myself taking things personally before now, nasty comments really upset me! I can't understand why people have to be so horrid! I can understand how people with thinner skin than mine might get very unhappy because of online trolls and bullying. There is no getting away from it, from school age to adulthood, from work or school to home - you can't just shut the door like when I was at school, as the trolls and bullies are there in your laptop, in your phone, on your tablet, and so they chip away at you if you let them. I know - I have seen what they did to my daughter. Its bad enough that children behave like that. How sad that adults feel the need to do it too.

So what can people do about it? Well sadly, a wanker will always be a wanker, and no amount of being  polite or asking them to be nicer will stop them from being a wanker. In fact it often fuels them as they get off on knowing they have got to their victim and then they act like even more of a wanker. However not all people are wankers, especially those that you know personally, so often just telling someone politely by private message they have hurt your feelings a bit will be enough to illicit an apology - they may not have realised they made you feel like that and will probably feel mortified by it.

Reporting to the social media platform, blocking and deleting are my best allies when it comes to true trolls - it takes bravery the first time you press the report button and you are crapping yourself the whole time incase they find out it was you, or they notice that you have disappeared and then they tell everyone... But like all things practice makes perfect and after a while it becomes a lot easier just to rid yourself of the virtual arseholes before they ruin your day too much. The world is a much nicer place when you are not having to put up with some troll you have never met, who has seemingly drawn your name out of a hat filled with random names of people to piss off.

In the dog world, there are many methods of training, and people can get very nasty with each other about terminology, let alone the actual methods of training. As a positive and force-free trainer I would hope to only ever promote positive and force-free methods, but this can illicit some nasty responses in others. Similarly, not all positive and force-free trainers use the same methods with people, and can be quite nasty too. I try to lead by example, being kind and hopefully well mannered, or even discuss rationally, rather than indulge the trolls in most instances, but sometimes that block button is just begging for a little tap, and sometimes it is for the best to tap it.

If you feel you are being bullied or abused by another dog professional and it is getting worse, it may be worth looking to your professional body to see if they can help you, or even the troll's own professional body, as a good professional body, like INTODogs, Pet Professional Guild British Isles or ICAN, will have certain expectations of their members and may take action if they feel their standards are not being upheld.

When you are feeling upset by the actions of another person in the "real" world (as opposed to online), sometimes it helps to have someone to talk to about it. Tell your partner, or your best friends - don't bottle it up. If it is at work and someone is bullying you and speaking to them directly has not helped, perhaps speak to the supervisor, or if they are the one that is bullying you, go above their heads and report them. You might not have been the only one who has had problems of this kind with this person - and you might not be the last either. The problem will not go away by itself, no matter how much you keep your head down.

Whether it be online, or in the workplace (or even if you are at school and reading this old lady's ramblings) trolling and bullying is not acceptable. You are not at fault, even though you may feel as if you are. If you feel you have nobody to talk to and are being affected, please do consider clicking some of the following links and getting some advice. You do not have to put up with it and there are ways to make it stop. 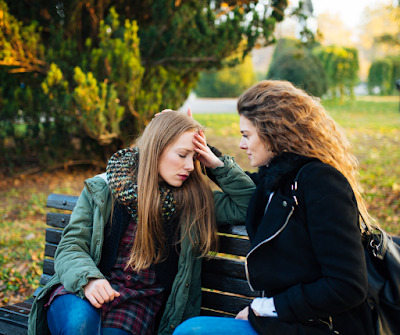