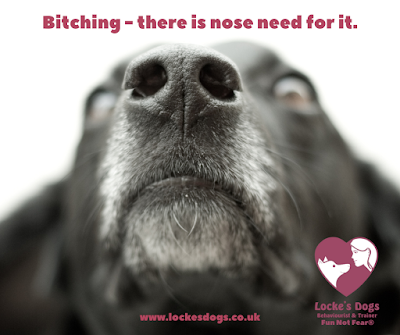 "Positive training". When you first hear of it, you think it sounds lovely. After all, the trainers and behaviourists are all super kind to animals and pride themselves on being able to teach the animals long lasting and effective training, using methods that the animal actively enjoys, rewards, games and all the good stuff, with none of the bad stuff like ecollars, prongs, yanking on the lead, anti-pull equipment that stops the dog from being able to move freely and so on. Taking into account the differences between each case, the individuals likes and dislikes, and helping them to have a happy life. Exactly how it should be.

So you assume that all positive trainers are also lovely. WRONG. As much as it pains me to say it, positive trainers bitch and moan about each other constantly - not in any of the groups I run as we do not allow it, but with each other, and in other groups and gangs they hunt in packs. They troll and make nasty comments on social media, slagging off people left, right and centre. And then those same trainers all go and slag each other off somewhere else to someone else. They then create politics that Westminster would be proud of. All trying to outdo each other in Game of Bones style power play and underhandedness in the quest to be the most successful and "positive" gang.

The biggest bullies publicly pick off anyone they can, in their own quest to make themselves feel the most "positive" of all, helping to create the phenomenon known as "imposter syndrome". They then feed into already anxious people's worries, diminishing what is left of their confidence as much as they can. Rather than helping or guiding people along on their positive learning journey, these delightful folk are desperate not to be seen as "less than" and, like all bullies, feel elevated by picking on other people. These bullies feel anxiety, the same as anyone else, but they choose to express it in a way that emulates the fear culture in an online toxic playground environment.

What can then happen is we lose very good behaviourists and students. Nice, caring and sensitive people who want to train nicely, but either can't stand the pressure of being horribly picked on by their peers, or they go over to the "dark side" where the trainers might zap the dogs but at least they are nicer to each other. Rates of suicide are higher among care industries, including that of the animal care industries than pretty much any other. We should be supporting each other, not bringing each other down. It is a real shame.

So, what can we do about it?

Firstly, stop allowing bullying in groups and on pages - we can talk about methods but not name pages or trainers. It is unhelpful and unprofessional to slate each other like that and just leads to defensive posturing.

If you have a real issue with something someone says, report it to admin or privately message the person involved. There is no need to talk down to people and humiliate them publicly.

Teach kindly and learn kindly. Remember that there is always another human on the end of the laptop, and your throwaway comment might cost them their career or in some severe cases - their life.

You are the sum of what you surround yourself with - make full use of your block button. Don't remain in toxic groups, or bother trying to argue with trolls and bullies. It really isn't worth your time. Similarly, don't join in if you see it happening, as that will mean you are just as bad.

Take time away from social media, and "work stuff", and spend time doing things that make you happy, with people who make you happy.

At the end of the day, we are all here because we wanted to help animals. Lets not tear each other down like bullies in a playground. No animal ever was helped by their trainer not being at their best or being forced to quit because of other trainers. Lets build each other up instead. It's really not that hard to just be nice to each other. After all, we can do it for animals - so why not each other?