We did some exploring! 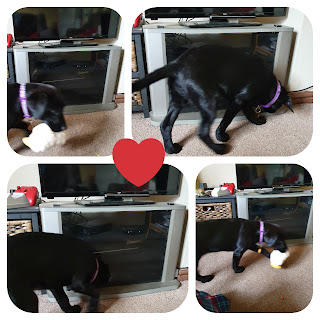 Today I discovered a dog in the glass under the magic window.

She kept copying me though, so I wasn't too sure about her. Besides... she doesn't smell much like a dog at all... weirdo...

GREAT NEWS: My brother Moo is really good at playing chase in the garden. He finally decided to play with me yesterday evening. I knew he couldn't resist for long. But I didn't realise just how much fun he can be when he is feeling happy.

We also played ball together with Mum and LOTS of balls, so that we always had at least one each and more on the ground, so there would be no need for any arguments. I, of course, do not need to argue as I am a fearsome beast, and just take what I want. Moo might get grumpy if I do that though and Mum says we have to be "appropriate", and not be too fearsome or beasty.

When you are as big and tough as me, it is very difficult to remember not to be too fearsome or beasty, but if I want to keep playing with Moo, I will do my best to remember, and Mum will move me away to do something different if she thinks Moo is in need of a rest. After all, he is a bit wussy... But I do like him. 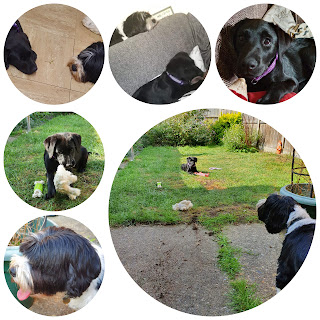 I also went for a walk yesterday to the park and saw a man throwing things around. I wasn't allowed to go and catch them though, as apparently, he was "juggling" and Mum thought it would be good for me to see something "novel, in a controlled manner". I got some sprats though, so I didn't mind.

I saw a racehorse. In fact, I saw three. They are big and stinky so I thought I had better have a quick look from far across the field and then leave them alone. Mum said I was very clever and a good girl for making a good decision. Not that I had much choice as Mum makes me wear a big long lead on my harness that stops me from going off to chase things. So I chose to come and get more sprats from Mum instead of trying to show the racehorses who is the most fearsome beast in the field.

I also saw a Catses. Moo has warned me about Catses. Especially a black Catses that always runs out to get him. I don't know what the fuss is about - I thought he looked like a great thing to chase. Shame I had this pesky long-line-lead-thing on!

I did wee on a little girl and also on the Tesco lady (don't tell Moo), so Mum thinks we need to do some "confidence-building games" while I am still little, so it doesn't become a thing. I am not sure this is true - after all, I am a fearsome beast!! And an intrepid explorer now I have been to the park too... but I like the sound of playing games with Mum so I will placate her.