The word "no" is a word often thrown about in the heat of the moment, when our dogs have committed or are about to commit some dreadful "crime", but what does it actually mean?
And does it actually help with your dog's behaviour?
If your child is playing Xbox and their room is a tip, do you yell "no" and hope they understand your meaning - or do you ask them to tidy up?
If your dog is singing the song of his people out of the window because that bearded postman with the hat walked by, then you might be tempted to tell your dog "no".
But what does it tell your dog?
If you are really lucky it might mean to your dog "stop barking" - though of course it could also mean "stop barking at that volume, maybe bark louder?" or "noooooo - there is a scary postman, let's all shout", or "don't bark near the window - lets bark at the cat on tv instead", or "run around and bark"... there are so many options - so many ways a "no" can be taken as a cue to do something else. 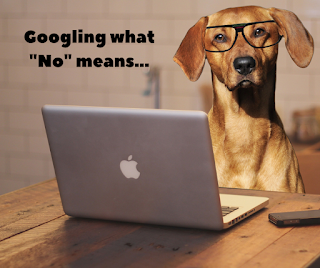 If instead of yelling "no", we were to ask our dog to do something else - perhaps recall them away from the window, and then give them a place to settle and something to settle with while you read your post, you are setting your dog up for success. You can reward them instead of blindly yelling "no" and you will be more likely to get that behaviour next time.
"The word "no" interrupts them, so they know what it means..." - yes and no... the word "no" CAN be used as an interrupter, albeit one that likely has many negative connotations attached (so we might train a "positive interrupter" instead but more on that another time)... and doesn't give the dog an idea of what is required next, so they can simply go back to what behaviour prompted the "no" in the first place, or possibly even lead to a different unwanted behaviour.
There are a million things that can follow a "no" - if the "no" is even heeded. But asking for what is actually wanted, that gives the dog a clear example of what to aim for, and what will garner rewards.
If the behaviour is a strongly built in need, like the need to chase, then recalling from squirrels with a treat is not likely to cut it alone. Yelling "no" will likely bear no fruit whatsoever. So instead, we give our dogs things they CAN chase, and reward them for doing so - chaser tuggys are my own dogs favourite. We give them a viable option, and reinforce it.
We also limit the ability to chase squirrels while we are reinforcing chasing the tuggy. So the dog practices what is preferred of them and gets really good at it, and less so that which is unwanted behaviour. In our house, tuggies are the holy grail of chasey things, the dogs LOVE them, because the dogs have built up a history of chasing them and really enjoying it. Not squirrels.
"Training with rewards is about being a pushover, bribing your dog and letting them behave how they please..." say people who resort to harsher methods.
But teaching with rewards and working WITH your dog is simply being more clever. As well as kinder.
The simple act of asking "what would I like my dog to do" and then asking for it, or teaching THAT behaviour is simply FAR more effective and much more fun for both of you.
So next time you are about to say "No" for the millionth time, ask yourself "What can I ask my dog to do instead?" and then teach that and reward your dog for it instead.
Posted by Freya Locke at 6:01 AM No comments: