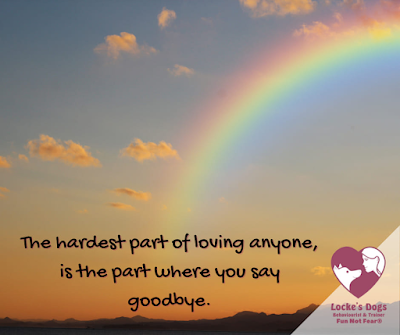 As some of you know, I lost our Moo on Thursday the 17th Feb, closely followed by my beloved Nan an hour or so later. You may not have met them, but they have helped so many of you and so I thought that I would share this with you.
My Nan was a huge part of my life and a wonderful, funny, kind and loving lady who taught me about being the kind of person I want to be. From childhood until the day she passed, I don't think there has been more than a day or two that I have not had contact with her in some way or told her that I loved her. She was 100.
I feel as though my heart has been ripped out.
A small comfort is that Moo and Nan were close in life. He came to visit her when I would take her shopping, and they had a special treat pot that I would have to reach and get down (Nan couldn't reach the top of the cupboard), and she would sit at her little table in the kitchen talking to Moo, asking him to "sit" and telling him what a good boy he was, feeding him his treats and naughtily sneaking him extra ones as though I would not notice. He would get excited to go see "his Nanny" and would trot up her path beaming his beautiful smile and go trotting into her kitchen, with his swisher wagging away expectantly. 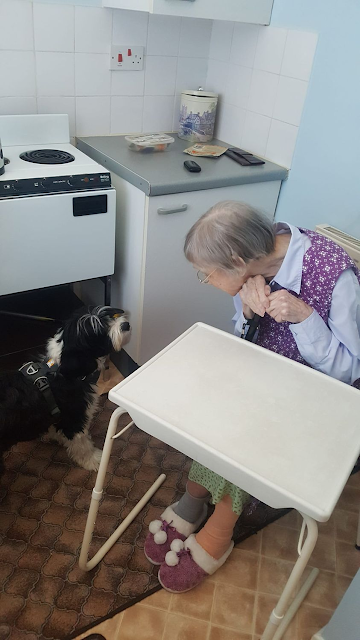 They loved each other a lot.
But Moo wasn't always the happiest of dogs. He is the reason Locke's Dogs began in the first place.
When I fell in love with him as a four-week-old pup and brought him home 4 weeks later, I had no idea how much he would change my life. He was my baby, and I was his Mummy from the second I met him and we were basically inseparable from then on.
My dear old Ruby, a Labrador, our dear cat Lily, Moo's brother Hank (who belonged to my then partner, but stayed with us for a while) and myself and the (then) children were quite the little family and it was a very busy, furry household.
It became evident quite quickly though, Moo was not well - he began to develop chronic sickness and diarrhoea and didn't have the love of life that I would expect a puppy to have. He seemed in pain a lot of the time, and the sickness and diarrhoea gave way to bringing up blood regularly, and colitis. The pain was so bad he stopped eating and began to lose a lot of weight.
We guessed it was diet-related, but no amount of changing his food seemed to help and he just grew sadder and sadder and in pain.
The pain made his behaviour erratic, and as none of the local trainers wanted an aggressive dog in class, I was at my wit's end. He was so underweight he looked neglected and had chewed bald patches in his fur.
He was only 18 months and we were already thinking of having him put to sleep. But I knew that under the growling and barking, was a very frightened little dog, who loved to be cuddled and comforted, and was the sweetest, cleverest boy. I knew I had to keep going.
So to cut a long story short, I took as many courses as I could afford until I was doing degree level stuff, to learn to help him myself. Which I did. I found a passion for dogs and dog behaviour that led to the creation of Locke's Dogs and Fun Not Fear® and everything in between. One of those courses, at degree level, was paid for by my Nan. She wanted us to have something to remember her with - but to have it while she was here to see us have it.
I found ways of feeding Moo that meant avoiding the things that hurt him so much and I taught him to eat again as he was afraid of his food. I taught him that other things are not scary after all, and he was relieved and began to make new friends, and enjoyed people and other dogs. We never did crack the postman, but we were winning either way. He put on nearly 7 kg from when he was ill - doubling his body weight. He learned so many tricks and he could basically speak English. He was the perfect dog.
He slept on my bed every night, on my lap every evening, and kissed me awake every morning. He was my world. I have never been so close to another being in my whole life, and I hope he knew the love I had for him.
Sadly, after all, he had been through and recovered from, despite changing the lives of many other dogs, he lost his life in the most rubbish way.
A suspected grass seed.
I won't go into the gory details, but he was in a lot of pain for a long time, and the boy was so very brave that the only thing we knew about it was that he had a bit of a nasal drip that made him cough.
We had sent him in for a second General Anaesthetic, after already having had his lungs examined previously, to check his nose and upper throat. On finding the scale of the problem, we decided that it would be kinder to let him go, and he was put to sleep, cuddled up on my lap in a blanket, quite calm and comfortable, and happy to see his Mummy.
It broke me. But I wanted to share his story with you as I know he was loved and I want the world to know that he was a dog who changed people and their dog's lives. And that my Nan did too. If I have ever worked with you and helped you, it is because of Moo and my Nan that we were able to help your dog.
They are angels officially now, but to me, they always were.
I don't know how I would cope right now without Twyla being beastly and keeping me busy. 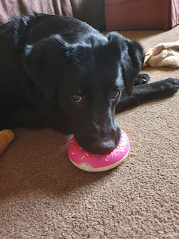 The only good thing to have come out of all of this heartbreak is that Twyla is proving she is actually a very good girl, and our bond is growing very strong, very quickly, in our sadness and having only each other to play with.
I am spoiling her, more than ever. Cuddling her more than ever. Letting her feel special and secure knowing Mummy loves her.
Posted by Freya Locke at 5:52 AM No comments: