Today I met up with a client at the July Course.

One of my favourite places to go dog spotting at a distance, with dogs who are worried about other dogs.

The dog, Ruby, a working GSD (not the one in the picture), was at one point unable to even be near to me without barking in panic, let alone see dogs, and other triggers such as lawnmowers etc.
But, as she was unable to take treats when confronted with triggers, even at a fair distance, we had to adapt our training to a much less intensive and more gentle and intuitive method.
Over several weeks, she is now able to see dogs in the distance and allow people close to her and her human without panicking.
We have been doing a kind of B.A.T. (Ref Grisha Stewart) style training, where we are allowing her to see her triggers.
Ruby generally pauses before she is at a distance which is too uncomfortable.
We then give her a few seconds of simply being allowed to look, before gently leading her away without pulling her, or making any fuss. 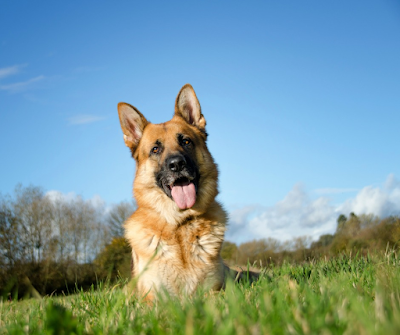 In this way, she is gathering information about the trigger, having a calm and "OK" experience, and then retreating to a place of safety to process what happened.
This means she is building up a history of "OK" experiences with triggers, from which to draw confidence.
She is now able to walk past people without reacting and can pass a dog across the road without reacting.
It takes a while and is not as sexy looking as the "pull up on the lead", or "jab them in the ribs" approaches you see on tv - but it is kinder to the dog, teaches them to feel comfortable and confident, and the training doesn't go out of the window as soon as the punishments stop - often then needing harsher punishment to control the barking again.
Deal with the cause of the barking - not the symptom.
It is lovely to see her visibly relaxing as the weeks go on

Email ThisBlogThis!Share to TwitterShare to FacebookShare to Pinterest
Labels: casestudies